To achieve this aim, it brings together individual members who are involved in the supply of raw materials and the end users of these materials in the manufacture of paint, printing ink, and adhesives. 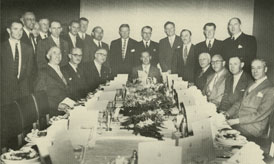 A.R. Penfold presented petition to Council of OCCA on for the formation of an Australian Section

Australian Section of OCCA formed. Based in Sydney, with branches in NSW and Victoria.

Victorian Branch commences delivery of Paint Technology course under the supervision of London based "City & Guilds".

Queensland Branch of the NSW Section formed in Brisbane

Queensland Branch becomes a Section of OCCA in its own right